Here’s a full video of me navigating the VR spaces that I created. I continued to add to the space I made from the previous “Recreating a Space” project. There aren’t that many VR experiences (or popular media in general) that capture experiences of Midwestern life so I wanted to portray spaces that are reminiscent of places in my home state of Michigan. 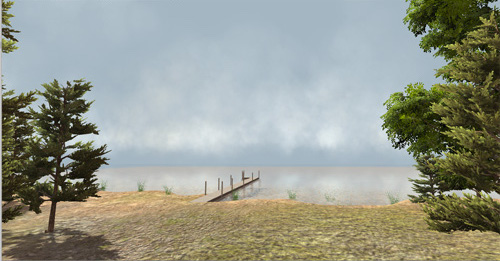 I wasn’t intending on creating a narrative with this piece, but I intentionally built them to be a part of the same world. In making sense of the scene sequencing, I had the spaces meld into each other with the user seeming to transition through the trees and then into the corn field. 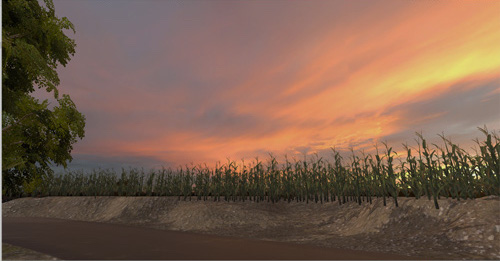 There’s also an element of timing where the scenes go from night to dark, suggesting that you’re spending a certain amount of time in each place. 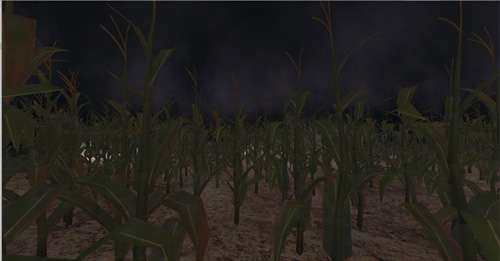 In the last scene, there’s something jarring about being in natural spaces (through the unnatural portal of virtual reality) and then being pulled back to present through the iPhone ringtone. It’s little bit of the the reality within a reality, but mostly I was interested in how something can be familiar and unfamiliar at the same time. 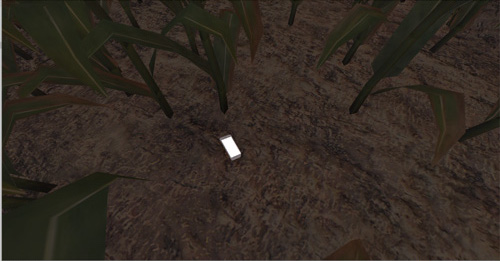 Here's a video with me navigating the space with a mouse. For my place, I've recreated a place I was visited this past summer on Lake Erie. I used Unity to pull assemble my scene.

And here are some of the important resources I used:

Although it’s a sunny day, the wind is cold on our faces as we walk through the park. Frosty leaves left behind from the fall crunch beneath our feet and crackle beneath the wheels of my best friend’s rusty red bike. We wander along curving paths that follows a partially frozen pond and discuss whether or not it’s really an issue that her boyfriend doesn’t know what eutrophication is. Woods shade out the sun and as we keep walking our laughs echo into the trees, making it feel like we’re the only ones in the park for a few moments.

Occasionally, couples and people with dogs pass us and I am starting to lose feeling in my hands and feet. We decide to go back. First we cross a small wooden bridge, and then pass by empty baseball diamonds. It’s a sharp contrast to the lively music and family barbecues in the summer that would always leave the lingering smell of smoke on my clothes. Leaving the park we see the sad remains of abandoned Christmas trees, gone through a wood chipper and now in massive piles along the road. I am happy to head home.

When Aidan and I were thinking about creating presence, we both wanted to do something that didn’t require anything unnatural like a VR headset. We chose to go with a situation we knew pretty well - riding the subway.

To take Sam out of the ITP environment, we had Sam listen to a recording of the train we found on YouTube and instructed him to focus on browsing his phone. We also attempted to stand near the metal lockers to make it seem more train-like. Aidan and Ellen act as other passengers on the train. They try to mimic the movement on the train by swaying and occasionally bumping into Sam. They’re also engaging in typical train activities like reading over his shoulder, moving around to get more space, pushing to get exit the train. Sam thought we might’ve been trying to make him feel like he was on a ship, but once we told him it was supposed to be the subway he quickly made the connection. I think one of the more immersive elements of being on the train is how the floor feels like it’s shaking and moving under you. It definitely would’ve be more immersive if we found a way to imitate this feeling of instability while standing on the train.

Aidan: One additional challenge for us was to recreate the experience of presence in an environment in which we are usually not particularly intellectually or emotionally present.  Physically, the subway is an incredibly immersive environment.  It grabs our full attention with noise, crowds of people, all variety of smells, and dangerous moving trains.  Despite this, we tend to 'check out' -- to look at our phones or books or anything but each other  -- and expend an incredible amount of energy not paying attention to our surroundings.  How do we recreate an experience we try to avoid experiencing in the first place?