The last couple weeks have been dedicated to taking our breadboard prototype version of the Sound House and turning it into the actual piece. I'll talk about the updated system diagram and BOM, the user testing from last week, and our progress with fabrication.

UPDATE TO SYSTEM DIAGRAM AND BOM
We've decided to work with the sound through a synthesizer instead of using Ableton on a laptop. This eliminated the need for us to use a laptop in our system and still maintain good options for sound. We have the resulting system diagram which corresponds to the prototype interface from this post. 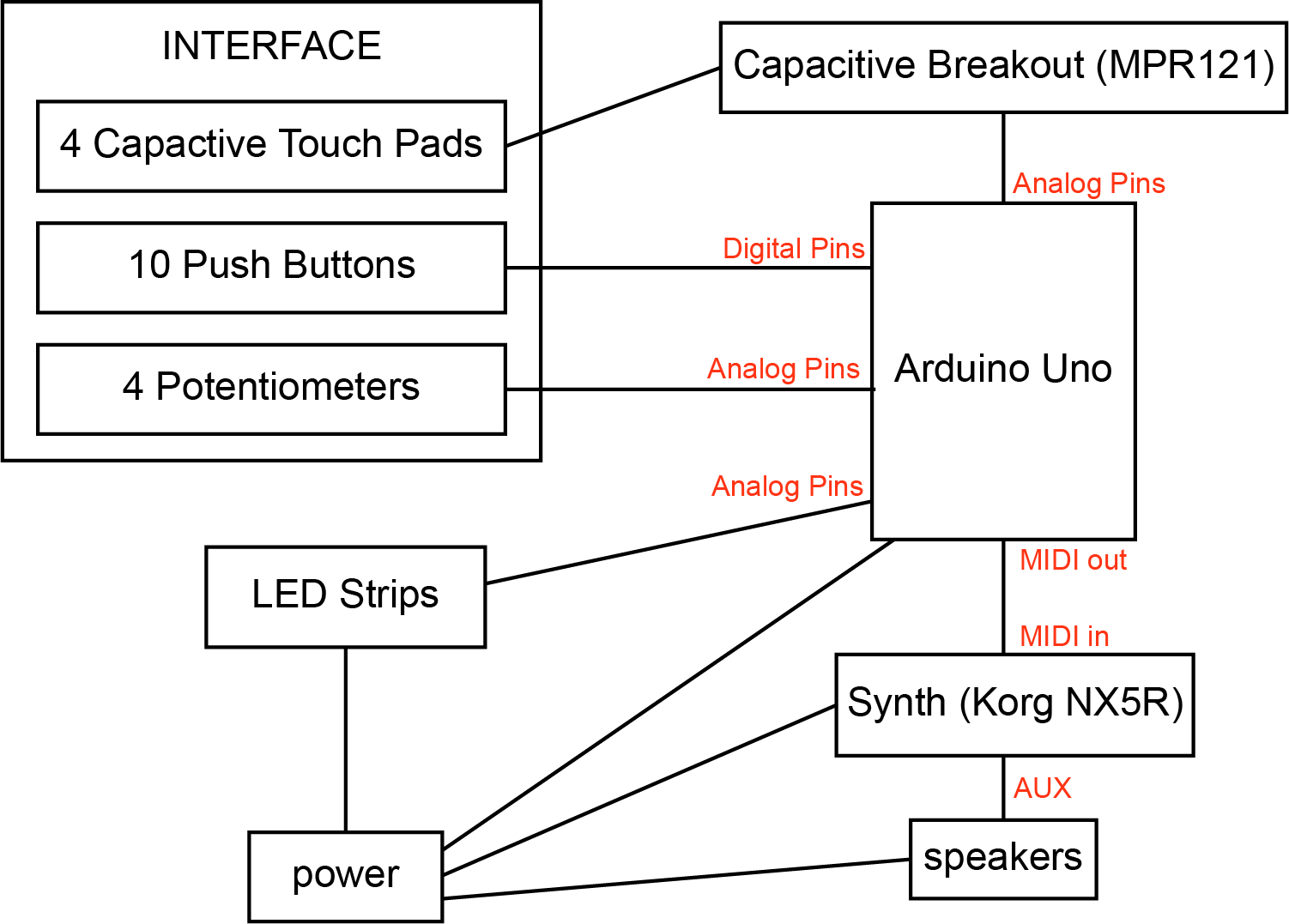 Instead of building a wooden structure for the tent, we are simplifying the build by hanging a fabric tent that is held up by a curtain rod that is hanging from the grid on the ITP ceiling. Yen gave us some big binder clips to connect the rod and the rope. Thanks, Yen! Here you can see it hanging up in its early stages of testing and fabrication. 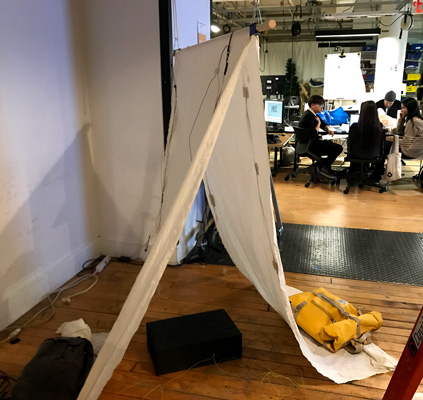 With all that figured out, here is the updated BOM.

USER TESTING IN CLASS
At this stage, we were able to do some user testing in class last week. We were still missing the capacitive touch drum pads on the interface and had not created our own programming for the LEDs at this point. Here's Isa and Nicolas user testing our project.

We received a lot of good feedback from our classmates:

We are taking a lot of this feedback into consideration. Updates to come in a few days!

FABRICATING THE INTERFACE AND TENT
We decided to utilize two boxes I found on the street for the interface enclosure. The smaller box was the perfect size to house the panel with the buttons, touch pads, and knobs. The larger box was the right size to get the appropriate height off the floor when stacked under the small box. It was also a good space to house our larger items - the power strip and the synth - and allowed us to run all of our cables outside the tent in one bundle. Now for some unflattering photos of me making things, but at least I'm wearing all my PPE. 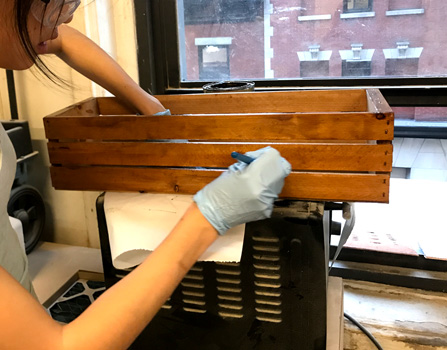 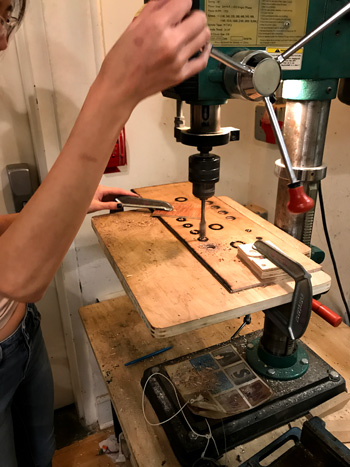 We got some LEDs lighting up when buttons are pressed on the interface. Next, we worked on turning this breadboard set up into something more real.

We originally had all the wires going into a single breadboard, but the wires kept slipping out of it. We decided the best way to keep the connections stable was to solder them to protoboards. We put the MIDI and LEDs on a separate protoboard so we could get a separate power source to the LEDs and also to have a place for the MIDI connector. The orange protoboard is a shield we made that has connections to the buttons, potentiometers, the capacitive breakout board, and the MIDI/LED protoboard. 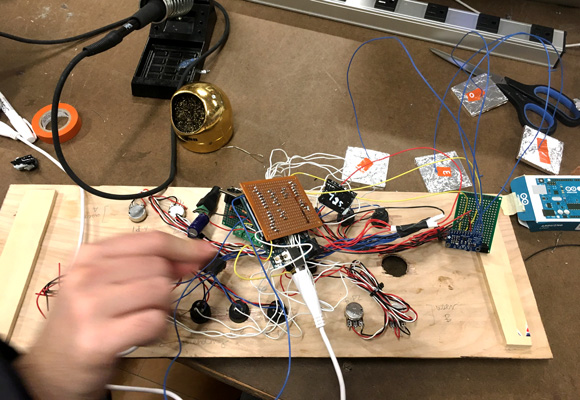 To make the touch pads, I used some foil, plywood squares, white paint marker, and spray adhesive. The wires were attached with electrical tape and then soldered to the capacitive touch board. Here is the inside of the panel looking more organized. I stabilized everything with zipties, hot glue, and tape. Just like the professionals.

Next, for the tent I sewed flaps for the entrances on either side. It was looking a little more structured. This is the view from the inside + Simon. 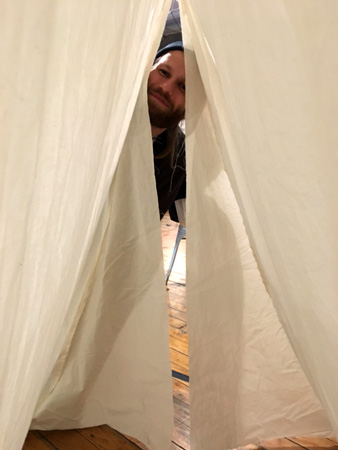 The LED lights looked more diffused when the were held away from the outside surface of the tent. We sewed up some strips to hold the LEDs, which we are planning to anchor to the ground at a further distance to get a more diffused effect. 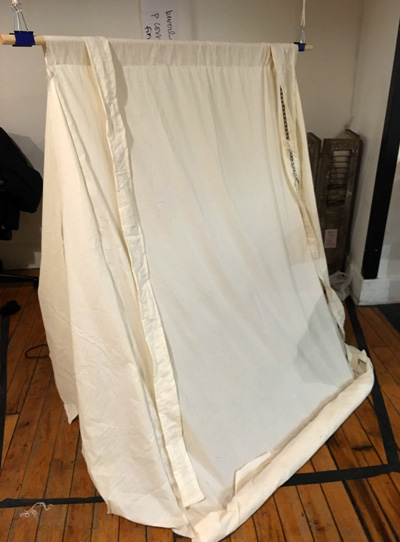 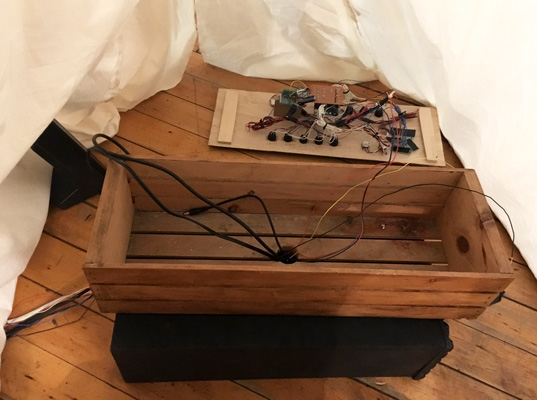